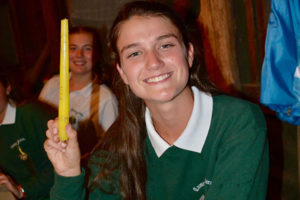 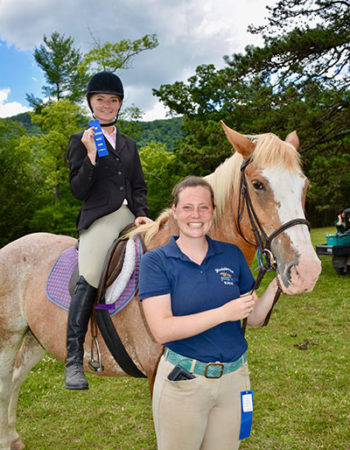 In addition to the regularly scheduled daily activities, campers can participate in a variety of special events and programs while at Strawderman. They include, but are not limited to the following:

Page: is a merit-based honor awarded at a candlelight service and is bestowed on those campers who are at least ten years old, have attended Strawderman for a cumulative period of 4 weeks and who have consistently exhibited true Strawderman Camp spirit.

SCS: Short for Strawderman Camp Spirit, SCS is a similar merit-based honor bestowed on those campers who are at least 12 years old, have received their Page, have attended Strawderman for a cumulative period of at least 8 weeks, and who have consistently exhibited true Strawderman Camp spirit.

Cabin Honors: Other honors, which are awarded nightly, include Spirit, Inspection, and Schedule and can only be earned by and awarded to an entire cabin.

Horse Shows: Competitive horse shows for riders at all levels with ribbon and best in show awards. See Riding for more information.

Water Pageant: The culminating event of the swim season showcasing campers’ talents in synchronized swimming, dance, swim stunts, acting, singing, set painting, and more – all executed in the context of a familiar story or fairy tale.

Choir Program: Every Sunday, the Senior and Junior choirs sing for worship in the Chapel in the Pines. On the seventh Sunday, the choirs perform much of the music from the summer’s repertoire.  The choir program is a blend of time-honored and new music. Some of the choral pieces are nearly as old as camp itself and some are brand new. Listening to choir is a chance for personal reflection and remembrance, an opportunity to hear live music in the most beautiful of settings, and a chance to honor traditions, old and new. See Choir for more information.

4th of July: Fireworks and a cookout

Christmas in August: A tradition involving the entire camp from the Director on down to the youngest camper. “Secret Santa” names are pulled from a hat and then campers and staff get busy making home-made presents for each other. The art room is always hopping at this time. This tradition promotes creativity, thoughtfulness, and inclusivity and is a way for young and old campers to connect with those they might not otherwise.

Shop at our ONLINE STORE!

Send us an Email